It was a grey, rainy evening in Paris, and I was at loose ends. No dinner plans, no evening events, and gloomy weather. I slogged along rue Mouffetard towards home, anticipating a solitary evening and feeling a bit sorry for myself. How to find fun and companionship with no friends around? 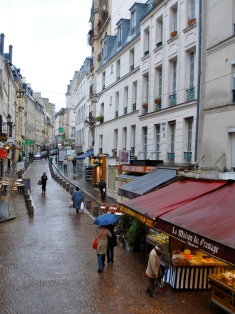 Rue Mouffetard in the rain

The pedestrian market street was empty except for umbrella-toting locals and shopkeepers locking their stores for the night. At the end of the road, I passed a solitary café. Its warm lights spread a glow on the rainy cobblestones and illuminated its name, Verre à Pied, in block letters above the door.  Big glass windows in the small green storefront showed a deep, narrow room with a wood-and-marble bar. And there was a handwritten sign in the window:  Musique, mercredi soir, 21h. Music, Wednesday, 9:00 – just an hour from now.

Here was the distraction I needed. I felt a little skittish about eating alone, but I was determined to take advantage of the opportunity. I pushed open the door. There was a short menu on the blackboard: Boeuf bourguignon sounded like the perfect French comfort food. I made my way to a table in back, sat near an old wood stove, and settled down to observe the entertainment. 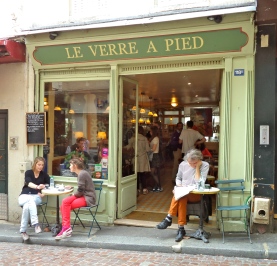 Patrons filled the small tables, chatting with the propriétaire tending the bar.  A guitarist arrived and began to croon French ballads. The audience hummed along and requested songs. I especially noticed a group at the next table, a man and two women. They sang along with all the songs, even harmonizing.  To my surprise, after a few songs the man stood and walked toward the guitarist, with applause from some of the diners.  He was stooped, slightly disheveled and seemed tired.  But when he reached the microphone, he straightened. He flipped up the collar of his leather jacket and greeted the crowd.  Then he launched into a romantic, dramatic interpretation of La Mer, a Charles Trenet love song.   The audience whistled and clapped, and he returned to his friends at the table. 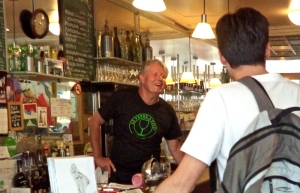 Other volunteer performers followed.  Then the guitarist seguéd into the Beatles.  Being American, I knew all the words, and couldn’t resist singing along from my seat.  The trio next to me moved their chairs closer, enthusiastically complimenting my singing and incorporating me into their conversation. We introduced ourselves – Serge, the singer, had a local reputation as an interpreter of French classics.  Sylvie, retired from civil service, was an active local volunteer.  Jocelyne, sociable and curious about the US, was visiting from the suburbs.   Collectively, they decided that I must perform too!

Yikes.  It seemed like a big step from a quiet dinner alone to belting out Beatles for an audience.  But before I even knew I’d said yes, I was at the microphone singing “I Want to Hold Your Hand”, then “Yesterday”, topped by a rousing sing-along of “Let It Be”. 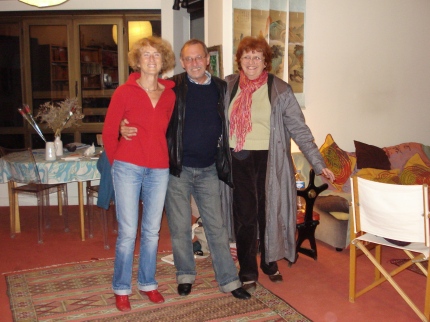 When the singing ended, Sylvie squeezed all four of us into her tiny Citroën, and drove to her nearby apartment.  Over a bottle of wine, we talked politics, health care and academics.  I learned that Serge looked tired because of a recent heart operation – “But I don’t feel tired when I sing,” he explained.   They welcomed me to the neighborhood, “Le quartier le plus sympa de Paris”*.  Then we piled into the car again, and they delivered me to my apartment in a warm rush of international good feeling.

It took me days to absorb this sudden encounter with new friends and fun. How had it happened?  Partly, good luck.  I couldn’t expect to be welcomed spontaneously every night. But that evening reminded me that determination and a little risk-taking frequently pay off. In fact, they’re essential to living well as a part-time Parisian.

Since this event, I’ve been back to Le Verre à Pied (The Wine Glass) several times, and learned that it has been in operation since the 1930s.  It has kept its authenticity despite having been featured in the movie Amélie, and attracts a loyal clientele of residents, students and families.   There are art exhibits on the walls and a pile of books on the old stove for relaxing with wine or coffee.  Go early – it’s only open 9:00 to 9:00 (4:00pm Sundays). It no longer hosts music nights but the food, fait maison (home-made), is terrific. Le Verre à Pied, 118 bis rue Mouffetard 75005, 01 43 31 15 72.

Charles Trenet was a French singer/songwriter active from the late 1930s to mid-1950s.  Americans know La Mer, the song Serge sang, as Bobby Darin’s Somewhere Beyond the Sea.

5 thoughts on “In Harmony with Paris”